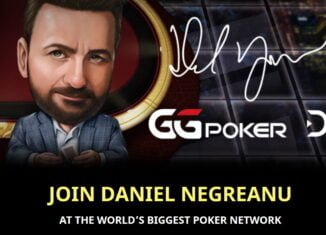 Poker player Daniel Negreanu is poker celebrity and one of the most well known and liked poker players around the globe. He is famous for his incredible ability to read players. He is funny charismatic persona and he has influenced the poker scene like nobody else. He has appeared in movies, and made series and books about poker. In this moment he is part of Team GGPoker.

Negreanu is amazing professional Canadian Texas Hold‘em poker player with aggressive style of playing and flair for reading opponents. He earned 2 World Poker Tour titles (WPT) and 6 World Series of Poker bracelets (WSP). His place in the official Poker Hall of Fame is well deserved, Negreanu poker-skills and achievements are incredible. He has also been Player of the year – The World Series of Poker, twice and currently placed third in all time poker earnings, around $42.000,000.

His parents immigrated to Toronto, Canada from Romania, seven years before Daniels birth on july 26, 1974. He is described as bad-mannered in school and as the years went on and Daniel went to college, he was several credits short of graduating. He was failing. At the age of 15 he learned to play poker and at 16 he was already ‘a regular’ at the local pool tables, he actually thought about becoming a professional snooker player. In the end his love of poker won. Negreanu eventually dropped out of school and began career in poker. He started as a rounder (an expert player who travels to seek out high-stakes games), he’s even been rumored to sniff out illegal games.

In his early twenties Daniel began working on his reputation and bankroll. He headed to Las Vegas, Nevada when he was 21 years old.  But, things didn’t go as planned, he ended up losing more than he could afford and he moved back to Toronto, and began rebuilding bankroll. Year 1998 Daniel won the $2,000 Pot Limit Hold’em at the World Series of Poker (he won $169,460), his first bracelet and the youngest winnner of bracelet. which is a big deal in poker world. From that moment, there was no turning back for young Daniel aka Poker Kid.

Do you think you can be next great poker player? Test your skills in a game of online poker. Register and see how good you are at Pokerstars.