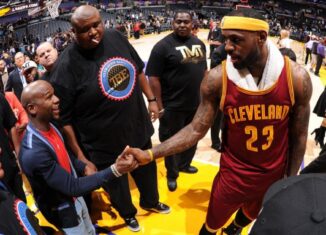 Floyd Mayweather, the “Money” boy himself!

Mayweather’s eagerness to bet big on sports has been very well documented. Especially by the HBO series “24/7.

Mayweather also topped himself when he bet $5.9 million on the Miami Heat in Game 7 of the NBA Eastern Finals few years ago. However, it is very important to put the numbers in perspective. His networth was estimated at $150 million back then. In fact that means he bet around 4% of his net worth on a single game. Sounds like a lot? Take a look at your savings account. Divide that hard-earned nest egg by 25 and think about risking that amount on something as unpredictable as a basketball game. In all honesty, even with LeBron on the court, not great idea.

Off topic: Here is video of “Money” boy” Mayweather picking up cash from the casino, on an average gambling night.

It is always hard to qualify someone as a good sports bettor. And this particular gamble actually stood a strong shot of holding up. June 19, the Heat had not lost back-to-back games since January 10. The Pacers had just beaten the Heat in Game 6, and Game 7 was in Miami. The spread against the Pacers was -7 but Floyd clearly had a hunch and it paid off, to say the least. He won $5 million from the wager.