Skip to content
You are here
Home > Casino > Girl who won $2.4 millions in Las Vegas 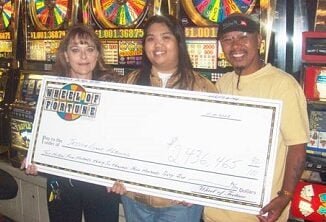 In 2008, girl who graduated from high school 2002, Jessica Agbunag was in Las Vegas with her boyfriend and family. In remembrance of her grandmother’s birthday. She was a frequent visitor to Las Vegas casinos, and she loved slot machines.

At first, the Wheel of Fortune machines were good to Jessica. Earlier that week at the same casino she won smaller amounts twice. On November 18 she inserted $16 into a Mega-Jackpot machine from the California Hotel and Casino and it hit the big prize she won $2,436,465 on her very first trip to Las Vegas.

When suddenly the bells started ringing and the lights began flashing Jessica discovered she hit the jackpot and excitedly told her boyfriend she’d won $2,400. Her boyfriend told her she’d made a mistake and its actually $2.4 million.

The 24-year-old nearly fainted at the news. She called her mom back in Hawaii to tell her but couldn’t stop crying or shaking.